A year ago, when COVID offered us a break, I met Mister ToutSurLeVin at Concours Mondial de Bruxelles (CMB) in Brno, Czech Republic ! During the time of this magnificent competition, we discussed our passions and our jobs. And since then we have stayed in touch thanks to social medias and we even saw each other again during the CMB 2021 in Luxembourg !

It was during this first encounter that Mister ToutSurLeVin learned about one of my great passion: Japanese sake. If it was simple curiosity in 2012, today I am happy to evolve in this very special world with my own business located in Bordeaux which is entirely dedicated to Japanese sake but also to Japanese spirits. 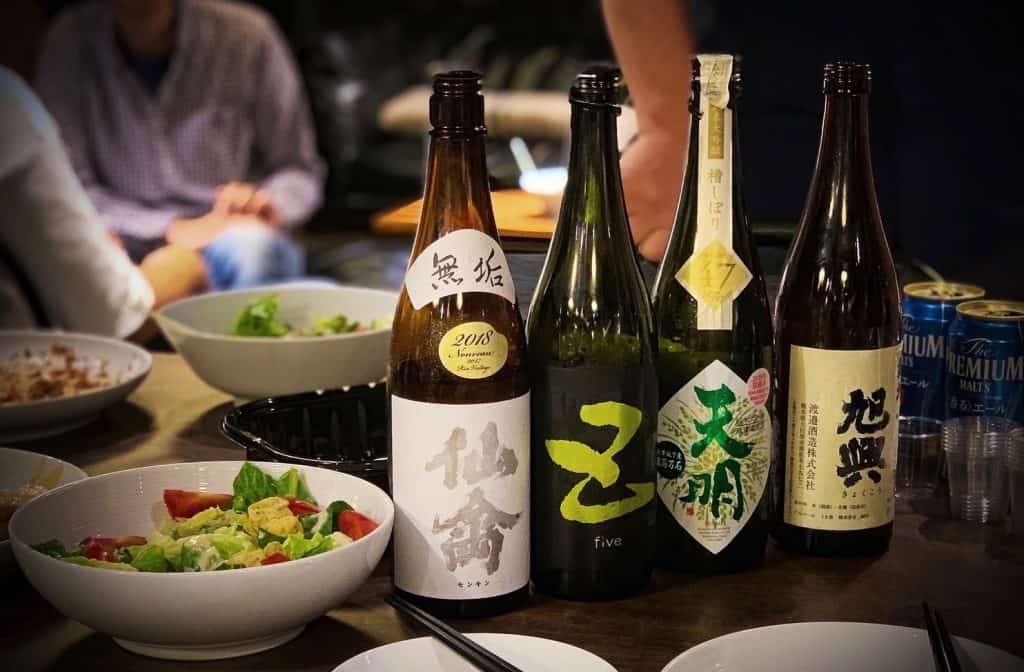 Japanese sake, or its real name Nihonshu, is a very mysterious drink. It’s hard to describe it because it can’t really fit into a box. It is often called « rice wine » but it is clear that the process of creating sake is more complex than the one to produce wine. Some will say that it’s a beer… But then again, it is not the reality: there is no malting, no bubbles and there is still more alcohol. So, to cut the pear in half and be simplistic, let’s say that making sake is like making a beer at the start and then like making wine at the end with little twists in the middle!

Japanese sake is a thousand-year-old alcohol from Japan made from rice with an alcohol content of around 15/16%. Far from this image of « rubbing alcohol » that is served (in France) at the end of a meal in small glasses with a naked woman at the bottom!

Personally, I like to build bridges with what I know: wine. In addition, I live in Bordeaux and it is therefore natural that I will compare and also highlight the differences between these two cultural drinks. So, I am not really shocked when I read « rice wine ». I even like the idea of ​​reviewing the notion of wine which is reserved only for grapes to make it a more generic term in order to include other concepts such as fruit wines (grape, apple, pear, tomato, pineapple. …) and grain wines (rice, sorghum, barley…). The debate is open !

But what can be the link between France, Quebec and Japanese Sake? Passion of course!

In December 2020, in my mailbox, I saw a message from Mister ToutSurLeVin with the subject « Sake » putting me in touch with François Chartier. If the name sounded familiar to me from the first few seconds, it was only by doing some research that I understood who François really was: his Wikipedia page helped me a little ! 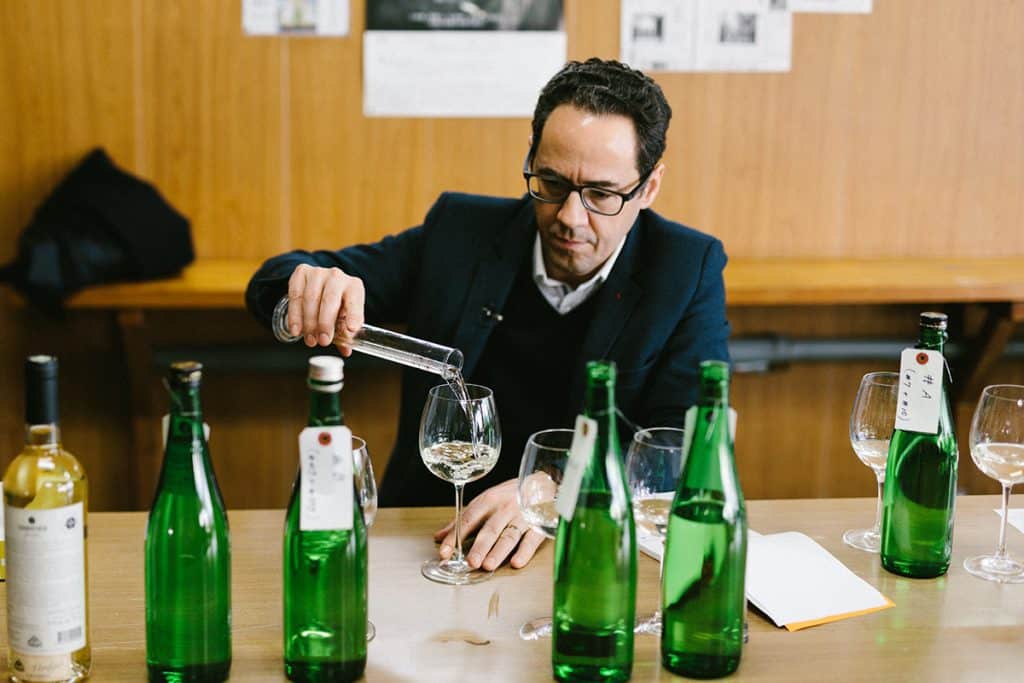 Born in Montreal, François is a sommelier, oenologist and author. In 1994, he became Best Sommelier International Grand Prix Sopexa and his book “Taste buds and molecules” was voted Best cookbook in the world in 2010 and 2013 in Paris, then in 2016 in China! For several years now, François has been particularly interested in Japanese sake: he has even become a Master Blender for one of the oldest sake houses in Japan, the Tanaka house. From this meeting was born a range of Japanese sakes: Tanaka 1789 x Chartier.

This is not the first time that a Westerner has immersed himself in creating sake in Japan and it is not the first time that I have tasted the result. But François Chartier is different from the others: he likes to talk and I therefore had the chance to have an online meeting to meet his team, tell about our backgrounds, our philosophy around sake, our expectations … It was very nice and I really felt privileged when he offered to drop me off a bottle of Tanaka1789 x Chartier Blend 001, the very first in France, during his visit in Bordeaux. 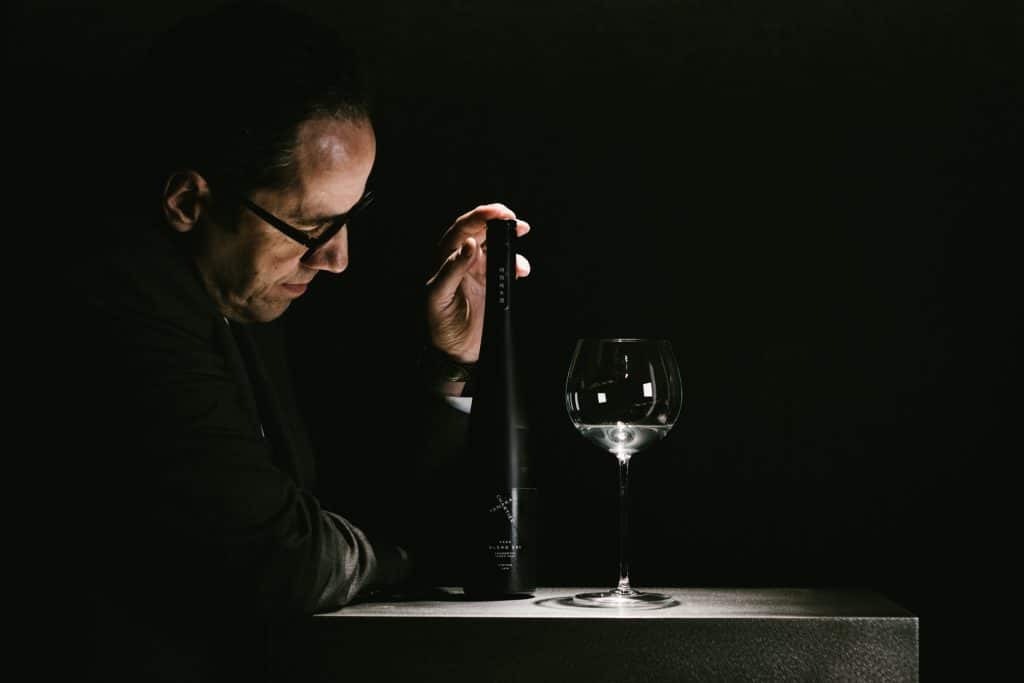 The specificities of this bottle: blending and versatility. Japanese sake is not known as a product made by blending different rices, different yeasts and / or different vats. François arrived with all his knowledge of this art and applied it to the world of sake. Codes have not been broken: Tanaka and Chartier have created new ones. Finally, the versatility of this sake is highlighted: its aromatic profile will evolve according to the serving temperatures, making this Blend 001 a wonderful companion for all gastronomy lovers.

Let’s remember that the truth is in the glass and not on the paper: the tasting is the most interesting moment. 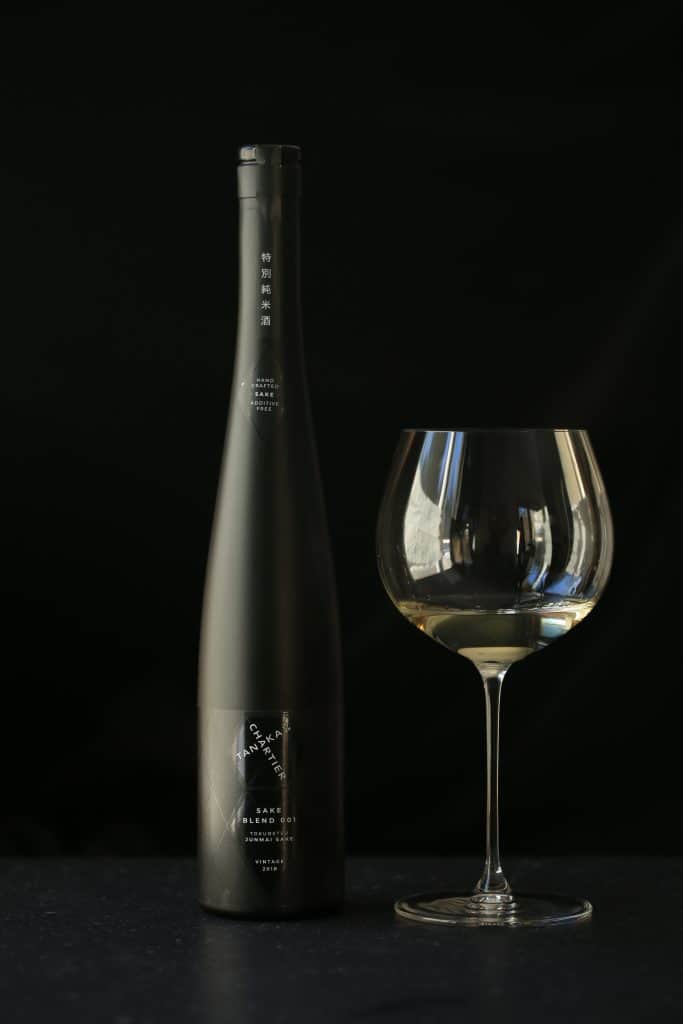 The bottle first is very pretty: black and matte. Slender, it reminds me of Alsace or Aurtian wine bottles. The glass stopper is also interesting and practical: this is done more and more in the world of Japanese sake. The first encounter with this sake is on freshness, tension and minerality with aromatic herbs, coconut water and anise which can remind of Sauvignon Blanc if you want to make (again) a link with wine. Then, it takes a little patience for the sake to heat up, evolve, take its place in the glass, stretch, lengthen, breathe … Then, it reveals a certain roundness with notes of stone fruits like peach and then borrows features of Chardonnay.

An interesting journey, a metamorphosis that tasting lovers know. Indeed, hasn’t it already happened to you to finish a bottle of wine and then to think that this last glass was « more » than the first: rounder, more aromatic, more complex, deeper, more charming… Imagine experiencing this with just one glass: between the first sip and the last one.

Tanaka1789 x Chartier offers us a real journey. And this is how France met Quebec through Sake! The world is small… and exciting…

Holder of the WSET Diploma, *Chloé Cazaux Grandpierre is a professional in wines and spirits « made in Bordeaux » : for 9 years she has worked in her company Chloe & Wines.

Chloé also has a specialty: having fallen into Japanese sake several years ago, she created Otsukimi – Buveurs de Lune in 2017 to distribute a sharp selection of Japanese sakes and spirits in metropolitan France. Chloé holds the title of Saké Sommelière, Shochu Advisor and is the only female SSA Saké Educator in France. It provides training and conferences for professionals and individuals. Otsukimi is recognized by the Japanese government as a Japanese Food Supporter (JETRO). contact@chloeandwines.fr